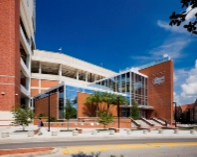 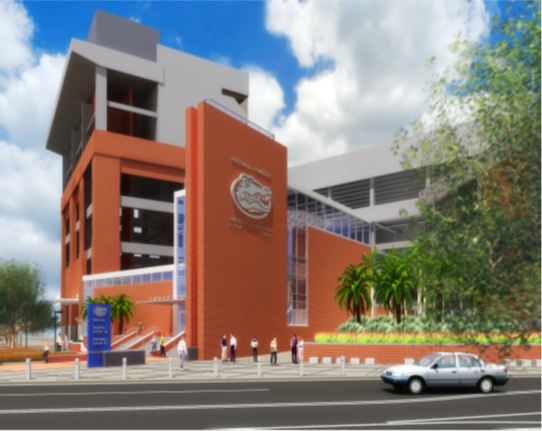 The project consists of an addition of 31,300 (GSF) and renovating an existing 18,400 (GSF) of offices, meeting rooms, weight room, Interactive Exhibition/Reception area, Gator Room, and support space for the University of Florida’s football program. The exhibition area was designed to celebrate and display the accomplishments of the University of Florida Gator football team. Displays include static exhibits such as National Championship trophies and Heisman trophies; video exhibits; and interactive audio/visual exhibits of Gator football highlights. A 500 seat “Gator Room” that adjoins the exhibition area is used for both recruiting, fund raising and meetings. The meeting room is fully equipped with multi-media audio/visual systems. The new addition to the stadium was designed to fit contextually with adjacent facilities while also conveying a prominent sense of arrival. The addition to the southwest corner of the stadium serves as a focal point for one of the main intersections on campus, Gale Lemerand Drive and Stadium Road, and the main entrance for the football program to the stadium. The Design team balanced this with the need to create a facility that clearly conveys a sense of importance, arrival, ease of access and inviting architecture to the new addition. The design team creatively developed the addition of a prominent street-level entry and incorporated it into the existing physical facility to allow ease of access to the various spaces and the stadium. The Southwest Stadium Expansion and Renovation project has just been designated the first LEED-Platinum building in Florida. In addition to that, it is also the first LEED-Platinum athletic facility in the nation.


If You Need A Solution ... We Are Available For You